Picking a perfect pumpkin is a lot of fun, but did you know the pumpkin has a long and storied history? The American word “pumpkin” originated from the Greek word ‘Pepon’, which means large melon. The word gradually changed through the years by the French, English, and then Americans to the pumpkin we know today. It is believed that pumpkins and squash originated in ancient America, even before the prevalent use of corn. Based on early documents, it appears that pumpkins were a major source of survival for the Pilgrims, especially during the winter months. Pumpkins were first documented as served at the second Thanksgiving celebration.

There are multiple theories as to the origins of what we now know as jack-o-lanterns and our modern Halloween celebrations. Early jack-o-lanterns from the Irish and Scottish were actually carved from potatoes and turnips for their Celtic celebrations. The English used beets and added lit lumps of coal inside the hollowed-out vegetables. As the European immigrants settled in to America, the tradition transitioned to the better-suited pumpkins.

The weather has made for a good pumpkin year this year.  So whether you want to pick your own right off the vine, or if you’re going to pick one from a pile, here are a few tips for finding that perfect pumpkin!

What’s With The Cinderella Pumpkins? 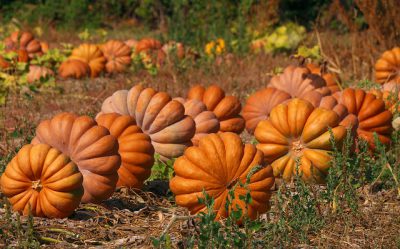 I don’t know about you, but I’ve been seeing these “Cinderella” pumpkins everywhere lately. They are actually a French pumpkin with the real name of Rouge vif d’Etampes. They are commonly known as the Cinderella pumpkin because they look like the one in the popular fairy tale. But it is this type of pumpkin that was likely cultivated by the early Pilgrims and served during those first Thanksgiving celebrations. They are great for decorations but also have a good flavor for a pie or any winter squash recipe.

Want to learn more about the different types of pumpkins and how to use them? Check out All About Pumpkins for some quick tips.

Time to Choose Your Own Pumpkin?

Here are a few places close by:

Want to Pick Your Own Right From the Vine?