The Oneida – A Hamlet in Queensbury

As settlers came to Queensbury after 1763, the town developed a very interesting settlement pattern. The first settlers were gathered around the Quaker Church and Cemetery and up Ridge Road. Many of these people were driven out during the American Revolution and the town began again.

Instead of the centrally planned settlement around what is now Glenwood Avenue and Hovey Pond that was marked out in the Queensbury Patent, small areas of the town evolved to provide services to the farmers and settlers in the town while Glens Falls emerged as a village and later a city by the Hudson River. These little pockets of settlement came to be known as hamlets.Over the years hamlets emerged at Oneida, Harrisena, Brayton, Jenkinsville, Top O’ the World, French Mountain, West Mountain, West Glens Falls, and South Queensbury. Each has a unique history. The center of some of the hamlets became a place to obtain goods, to exchange information, and to obtain mail. They became very lively gathering places. Comparing maps of 1856 to 1876 one can readily see how the hamlets came to flourish. After 1875 agriculture began to decline and eventually the hamlets disappeared. Today these locations in the town still carry the hamlet’s name, some old residences and structures, and a lot of local history and lore. 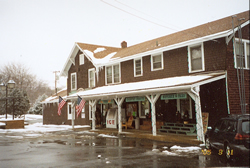 One of the most prominent hamlets, Oneida Corners, was situated at the intersection of Ridge and Sunnyside Roads. It extended both east and west along Sunnyside Road by the lake. The first house here was built by Joshua Chase ca. 1793. Around 1800 Thomas Hammond, an Oneida Indian, had a thriving trade business at the corner selling lumber and general merchandise. People would say, “I’m going to the Oneidas” – hence the origin of its name.

In 1836, Gordon’s Gazeteer describes Oneida as a village 8 miles SE from Caldwell and 5 miles NE from Glen’s Falls on a pleasant plain with 2 taverns, 2 stores, a saw mill on Halfway Brook and 15 dwellings. Around 1850 Quartus Curtis operated a woolen mill at Factory Hill just north of the intersection. Sixteen workers were employed in 1859, but the mill failed at the time of the Civil War with the decline in sheep production in the town and the property burned in 1869. 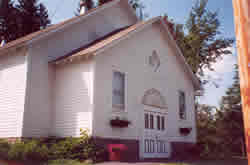 In 1855, Isaac Burt operated Burt’s Hotel, a large two story frame building, for 40 years. This site became Bardin’s Store and today is Bean’s Country Store. Diagonally across is the Mohican Grange built in 1923. 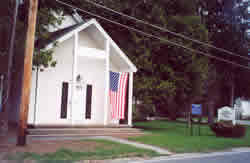 In 1802, the Quaker Church south on Ridge Road was moved to the present site of Oneida Community Church to serve the “country” Quakers. 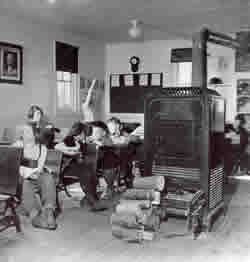 A one room school, District 19 was located on the south side of the road opposite the old Bay Ridge firehouse.

Further west on the north side of the road lies Lake Sunnyside, called Round Pond in 1795 when Elder Bates convened his Baptist Meeting in a log church on the shores. Across the road is the Sunnyside Cemetery where many of the early settlers are buried.

In 1907, DeWitt Clinton Jenkins petitioned the town to erect an iron fence around the cemetery costing $130. 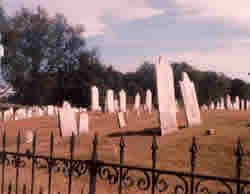 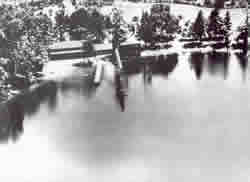 In the 20th century Preston and Bessie Carpenter, the parents of former town council woman, Betty Monahan, developed Carpenter’s Pavilion with swimming on the lake where a high diving board , picnic area, a snack concession and dance hall served the summer crowd. 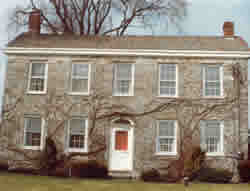 At the west end of the road the Beers, Odell, Zverblis homes are still standing. Out east of the corners is the stone mansion home of Judge John Austin, once a Seelye home.